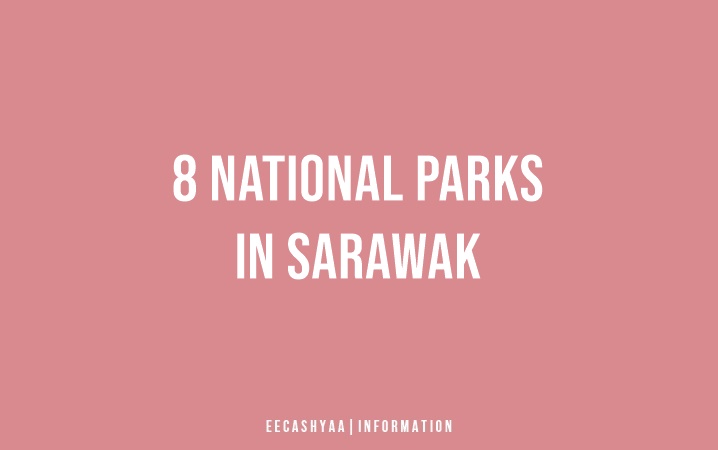 This is definitely one of the reasons to love Sarawak, especially for a nature lover. Apart from the foods, Sarawak offers an incredible beauty of nature. We have the most extensive protected area networks in Malaysia. Based on Sarawak Forestry, the protected area network includes 30 national parks, 4 wildlife sanctuaries and 10 nature reserves. There are only 15 of them that is opened to public which includes national parks, nature reserves and wildlife centers. And in this post, I am going to list 8 of the national parks in Sarawak!

1. Gunung Mulu National Park is famous for its limestone karst formations. Features include enormous caves, vast cave networks, rock pinnacles, cliffs and gorges. The 52,864-ha park contains seventeen vegetation zones, exhibiting some 3,500 species of vascular plants. Its palm species are exceptionally rich, with 109 species in twenty genera noted. The park is dominated by Gunung Mulu, a 2,377 m-high sandstone pinnacle. At least 295 km of explored caves provide a spectacular sight and are home to millions of cave swiftlets and bats. The Sarawak Chamber, 600 m by 415 m and 80 m high, is the largest known cave chamber in the world.It has been said that the chamber is so big that it could accommodate about 40 Boeing 747s, without overlapping their wings. The nearby Deer Cave is one of the largest single cave passages in the world. (source : Wikipedia & UNESCO)

2. Niah is one of Sarawak’s smaller national parks, but it is certainly one of the most important, and has some of the most unusual visitor attractions. The park’s main claim to fame is its role as one of the birthplaces of civilisation. The oldest modern human remains discovered in Southeast Asia were found at Niah, making the park one of the most important archaeological sites in the world. Yet there is much more to Niah than archaeology. A vast cave swarming with bats and swiftlets; the thriving local economy based on birds-nests and guano; ancient cave paintings; a majestic rainforest criss-crossed with walking trails; abundant plant and animal life – all these and more make up the geological, historical and environmental kaleidoscope that is Niah. Niah National Park is located on the Sungai (River) Niah, about 3 km from the small town of Batu Niah, 110 km south-west of Miri. (source : Sarawak Forestry)
3. With its rainforest, abundant wildlife, jungle streams, waterfalls, interesting plant life, secluded beaches, panoramic rocky shoreline, bizarre rock formations and extensive network of trekking trails, Bako It is one of the smallest national parks in Sarawak, yet one of the most interesting, as it contains almost every type of vegetation found in Borneo. The well-maintained network of nature trails – from easy forest strolls to full-day jungle treks – allows visitors to get the most out of this unique environment. National Park offers visitors an excellent introduction to the rainforest and coastline of Borneo. Bako may not have an instantly recognisable star attraction, but there can be very few places in the world that pack so much natural beauty into such a limited area, all just 37 km from Kuching. Its accessibility – and its sheer range of attractions and activities – have made Bako one of the most popular parks in Sarawak. (source : Sarawak Forestry)

4. Loagan Bunut, which centers around Sarawak’s largest natural lake, is one of the most unusual aquatic ecosystems in Malaysia. The lake normally covers an area of approximately 65 hectares. However when the water level in the adjacent Tinjar river is low, the shallow lake can drain completely, leaving a huge expanse of dried and cracked mud. This normally occurs two to four times a year, in February and in late May or early June/July. This unique cycle of flood and drought has created a remarkable food chain which supports a large variety of aquatic and terrestrial animals. The remaining parkland, which covers approximately 100 sq km, is covered with a variety of forest types, ranging from mixed peatswamp forest with huge stilt-rooted trees at the water’s edge, to towering Alam forest with a canopy height of over 60 m. (source : Sarawak Forestry)

5. Lambir Hills National Park is probably the world’s most complex and diverse forest eco-system. In a total area of just 6,952 hectares, experts have found what appears to be the greatest level of plant biodiversity on the planet. It is not only plant life that is diverse and plentiful at Lambir – 237 different species of birds (at the last count), flying squirrels, wild pigs, gibbons, many different types of monkey, various species of deer, and untold insects and other invertebrates, all combine to create Lambir’s rich biological kaleidoscope. As if all this abundant nature wasn’t enough, Lambir’s unusual geology has created dozens of sparkling waterfalls and bathing pools scattered about the rainforest. Take into account how compact and conveniently located Lambir is, and you have one of the most accessible and enjoyable national parks in all of Malaysia. (source : Sarawak Forestry)
6. The beauty of Similajau National Park is its coastline, a chain of golden sandy beaches, punctuated by small rocky headlands and jungle streams, and bordered by dense green forest.The park covers an area of 8,996 hectares, and the main trekking trail hugs the coast so that visitors are never far away from the main attractions of Similajau. Similajau is best visited during the dry season (approximately February to October) when the coastline at its most beautiful and the emerald green waters are crystal clear and ideal for swimming. The park is located 30 km north-east of the town of Bintulu, and is a very popular destination at weekends. If you wish to avoid the crowds you are advised to go during the week, when you are likely to have the park very much to yourself. (source : Sarawak Forestry)
7. Batang Ai National Park is part of the region’s largest trans-national protected area for tropical rainforest conservation. The 24 sq km park adjoins the Lanjak-Entimau Wildlife Sanctuary in Malaysia and the Bentuang-Karimun National Park in Indonesia. Together these totally protected areas cover almost 10,000 sq km and form a sanctuary for one of the few viable orang utan populations in Borneo (estimated at over 1,000 animals) as well as many other endangered species. For conservation reasons, Batang Ai National Park is the only part of this area open to visitors, but as it has the highest orang utan population density in central Borneo (up to 1.7 animals per sq km), there is a good possibility of seeing wild orang utan. However orang utan sightings should be regarded as a bonus not as a guaranteed experience. (source : Sarawak Forestry)
8. Gunung Gading National Park has a very special star attraction – the Rafflesia, the world’s largest flower – and the park is one of the best places in Asia to view the Rafflesia’s spectacular blooms. Gunung Gading sprawls across four jungle-clad mountain peaks, and its dense primary rainforest is criss-crossed by crystal clear streams and waterfalls. The park is easily accessible from Kuching on a day trip. Those wishing to stay longer can enjoy Gunung Gading’s other attractions – particularly its rainforest scenery, waterfalls and jungle trails. Some of these trails lead to the peaks of the mountains that make up the park and offer challenging jungle treks. (source : Sarawak Forestry)
Ain’t this is amazing to you? There are also other national parks in Sarawak and you can simply visit the Sarawak Forestry website to see the list and read the information. Among all the national parks I listed here, I have only been to Gua Niah National Park. The rest is yet to be explored! Maybe I’m not supposed to create this post cause I myself never been to these places before. My intention is only to share with people about the places and for myself to learn and read. If I had the chance, I would defnitely go to all this places. Lambir Hills National Park is seriously the nearest from my town yet I still haven’t got a chance to visit the place. Hopefully one day I am able to experience and get closure to this nature for real!
Toddles! x